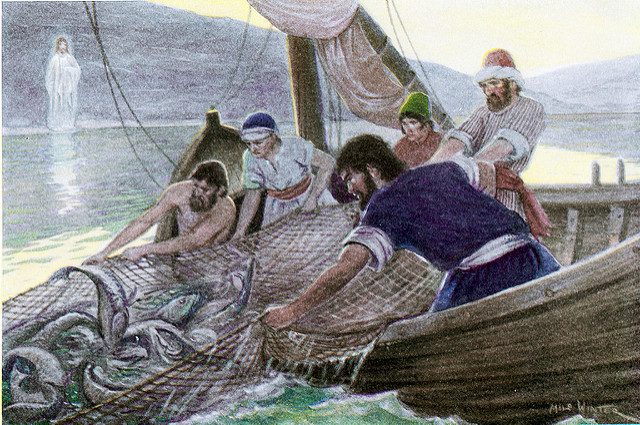 Mat 13:47  Again, the kingdom of heaven is like unto a net, that was cast into the sea, and gathered of every kind:
Mat 13:48  Which, when it was full, they drew to shore, and sat down, and gathered the good into vessels, but cast the bad away.
Mat 13:49  So shall it be at the end of the world: the angels shall come forth, and sever the wicked from among the just,
Mat 13:50  And shall cast them into the furnace of fire: there shall be wailing and gnashing of teeth.

Which vessels were “left” in the boat? The “good” ones! The “bad” vessels were “cast away!” Jesus went on to say that this is how it will be at the end of the world. No pre-trib rapture, the “just” aren’t taken up and away, just the opposite, the “just” are LEFT while the “wicked” are “cast into a fiery furnace.”

Joh 15:2  Every branch in me that beareth not fruit he taketh away: and every branch that beareth fruit, he purgeth it, that it may bring forth more fruit.
Joh 15:6  If a man abide not in me, he is cast forth as a branch, and is withered; and men gather them, and cast them into the fire, and they are burned. [1]

Those who don’t abide (remain) in Christ are “cast forth” and gathered by angels (Angels are often called “men” in the bible) who “cast the unfruitful into the fire.” Notice which branches were “taken away” – the unfruitful ones.

Mat 13:27  So the servants of the householder came and said unto him, Sir, didst not thou sow good seed in thy field? from whence then hath it tares? (darnel or false grain; a metaphor for false believers)
Mat 13:28  He said unto them, An enemy hath done this. The servants said unto him, Wilt thou then that we go and gather them up?
Mat 13:29  But he said, Nay; lest while ye gather up the tares, ye root up also the wheat with them.
Mat 13:30  Let both grow together until the harvest: and in the time of harvest I will say to the reapers, (angels) Gather ye together first the tares, and bind them in bundles to burn them: but gather the wheat into my barn.

Mat 13:36  Then Jesus sent the multitude away, and went into the house: and his disciples came unto him, saying, Declare unto us the parable of the tares of the field.
Mat 13:37  He answered and said unto them, He that soweth the good seed is the Son of man;
Mat 13:38  The field is the world; the good seed are the children of the kingdom; but the tares are the children of the wicked one;
Mat 13:39  The enemy that sowed them is the devil; the harvest is the end of the world; and the reapers are the angels.
Mat 13:40  As therefore the tares are gathered and burned in the fire; so shall it be in the end of this world.
Mat 13:41  The Son of man shall send forth his angels, and they shall gather out of his kingdom all things that offend, and them which do iniquity;
Mat 13:42  And shall cast them into a furnace of fire: there shall be wailing and gnashing of teeth.
Mat 13:43  Then shall the righteous shine forth as the sun in the kingdom of their Father. Who hath ears to hear, let him hear.

In this passage Jesus spells it out plainly – the angels reap the final harvest gathering the unjust FIRST and casting them into the furnace. THEN the righteous shine forth in his father’s kingdom. No Pre-Trib rapture of the saints is evident in this or any of the aforementioned passages.

Mat 24:29  Immediately after the tribulation of those days shall the sun be darkened, and the moon shall not give her light, and the stars shall fall from heaven, and the powers of the heavens shall be shaken:
Mat 24:30  And then shall appear the sign of the Son of man in heaven: and then shall all the tribes of the earth mourn, and they shall see the Son of man coming in the clouds of heaven with power and great glory.
Mat 24:31  And he shall send his angels with a great sound of a trumpet, and they shall gather together his elect from the four winds, from one end of heaven to the other.

When are the “elect” gathered? IMMEDIATELY AFTER THE TRIBULATION and not before!

1Th 4:14  For if we believe that Jesus died and rose again, even so them also which sleep in Jesus will God bring with him.
1Th 4:15  For this we say unto you by the word of the Lord, that we which are alive and remain unto the coming of the Lord shall not prevent them which are asleep.
1Th 4:16  For the Lord himself shall descend from heaven with a shout, with the voice of the archangel, and with the trump of God: and the dead in Christ shall rise first:
1Th 4:17  Then we which are alive and remain shall be caught up together with them in the clouds, to meet the Lord in the air: and so shall we ever be with the Lord.

Here Paul says that those saints still alive at Christ’s coming won’t be “caught up” (taken up) until AFTER the “dead in Christ” arise. This is a very strong passage which states plainly the order in which saints are taken up into the air and which also refutes a Pre-Trib Rapture. How can there be a Pre-Trib Rapture of living saints when ALL God’s saints, dead or alive are taken up TOGETHER at the same time???

I would like to see one bible verse or passage which clearly shows that SOME saints will be taken or caught up to meet the Lord in the air BEFORE the Tribulation period. Anyone who knows of such a verse, please write to me about it. And, I’m not talking about some allegorical interpretation involving the Jewish wedding ceremony by which some have concluded that there is a “catching up” of SOME saints who have proved themselves worthy to escape the Tribulation, while other, carnal believers are “left” behind to suffer through it. I’d love to see just one solid piece of evidence, one sure word of Scripture to back up such interpretations.

Why is this important you might ask? It’s very important to know everything you can about Christ’s Second Coming so that you can be ready to meet Him when He comes. Many I think, will be unprepared, having been lulled to sleep by false shepherds telling them that they will be RAPTURED out of the world BEFORE the Great Tribulation starts. Whoever believes those shepherds and doesn’t search out the Word of God for themselves is going to be DECEIVED thinking that they won’t have to endure that which is coming to “try the WHOLE EARTH” [Rev 3:10].

1Pe 4:12  Beloved, think it not strange concerning the fiery trial which is to try you, as though some strange thing happened unto you:
1Pe 4:13  But rejoice, inasmuch as ye are partakers of Christ’s sufferings; that, when his glory shall be revealed, ye may be glad also with exceeding joy.
1Pe 4:14  If ye be reproached for the name of Christ, happy are ye; for the spirit of glory and of God resteth upon you: on their part he is evil spoken of, but on your part he is glorified.
1Pe 4:1  Forasmuch then as Christ hath suffered for us in the flesh, arm yourselves likewise with the same mind: for he that hath suffered in the flesh hath ceased from sin;
2Ti 3:12  Yea, and all that will live godly in Christ Jesus shall suffer persecution.
1Pe 2:20  For what glory is it, if, when ye be buffeted for your faults, ye shall take it patiently? but if, when ye do well, and suffer for it, ye take it patiently, this is acceptable with God.
1Pe 2:21  For even hereunto were ye called: because Christ also suffered for us, leaving us an example, that ye should follow his steps:
1Th 3:3  That no man should be moved by these afflictions: for yourselves know that we are appointed thereunto.
1Th 3:4  For verily, when we were with you, we told you before that we should suffer tribulation; even as it came to pass, and ye know.
2Ti 3:12  Yea, and all that will live godly in Christ Jesus shall suffer persecution.
Mat 10:22  And ye shall be hated of all men for my name’s sake: but he that endureth to the end shall be saved.

Who shall be SAVED? He that endureth to the END of this Age; who remains faithful to the Lord Jesus Christ while enduring persecution and tribulation.

I wonder how people can ignore the preponderance of scriptural evidence for a Pre-Wrath or Post Tribulation “catching up” of the saints and cling to a Pre-Trib Rapture. Could it be a matter of not wanting to suffer for Christ, of not wanting to bear the shame of the Cross, preferring to live in agreement with the world and in so doing, avoid persecution and tribulation? Truth is, there will be no escaping persecution and tribulation in this world if you’re a true follower of Jesus Christ, for to such we have been called!

Who’s a true and a false Christian, who’s deceived and how to know, taking Communion as a false believer.