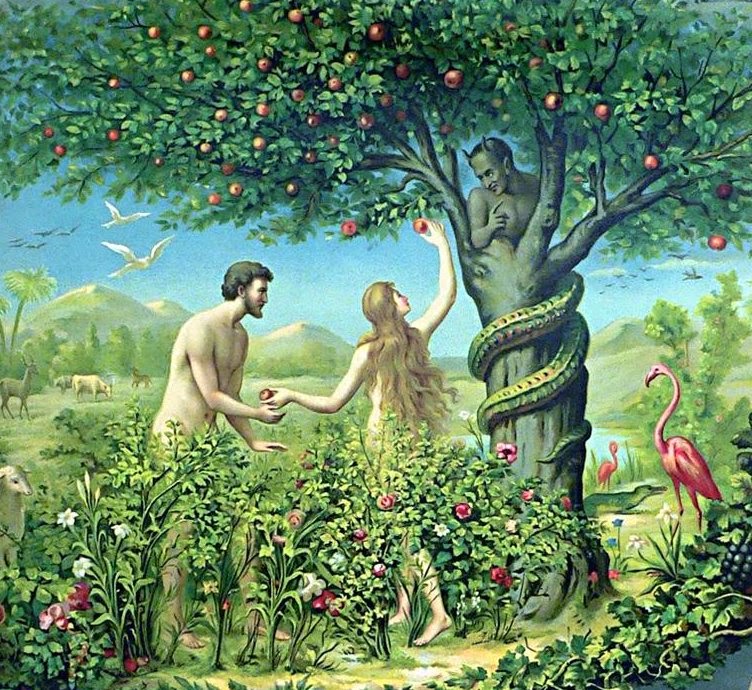 1Jn 3:8  He that committeth sin is of the devil; for the devil sinneth from the beginning. For this purpose the Son of God was manifested, that he might destroy the works of the devil.

1Jn 3:10  In this the children of God are manifest, and the children of the devil: whosoever doeth not righteousness is not of God, neither he that loveth not his brother.
1Jn 3:12  Not as Cain, who was of that wicked one, and slew his brother. And wherefore slew he him? Because his own works were evil, and his brother’s righteous.

Joh 8:44  Ye are of your father the devil, and the lusts of your father ye will do. He was a murderer from the beginning, and abode not in the truth, because there is no truth in him. When he speaketh a lie, he speaketh of his own: for he is a liar, and the father of it.

Jesus was speaking here to Jewish scribes and the sect of the Pharisees who were questioning Him about His teachings and claims of divinity. Some of those Jews believed on Jesus after hearing Him speak that day. Read John 8:1-30.

There’s a teaching that the “seed” spoken of in Genesis and elsewhere, is the physical offspring from sexual union between Eve and the Serpent in the Garden of Eden when he seduced her to eat of the Tree of Knowledge of Good and Evil. This teaching claims that Cain and his posterity were the physical offspring of Satan. [1] This “serpent seed” doctrine also claims that the descendants of Cain are the Jews. Others who’ve studied this topic have arrived at different conclusions. Cain and his descendants may have been wiped out by the great Flood, pestilence, disease, beasts, famine, or war. Maybe Yahweh didn’t think Cain’s line worth mentioning after Cain became the first murderer? Maybe God didn’t mention him or his descendants because He had chosen a DIFFERENT bloodline (that of Seth) to be the one through which Yeshua would be born into the world. Makes sense to me that Yahweh wouldn’t want the bloodline of a murderer to birth Yeshua (Jesus) Ha Mashiach (the Messiah).

Perhaps you did not notice that, besides Cain and Abel (who was murdered), Adam and Eve then had another son called Seth, and Noah’s line of descent came through Seth, not Cain. 1 Chronicles 1:1 states, “The descendants of Adam were Seth, Enosh, Kenan, Mahalalel, Jared, Enoch, Methuselah, Lamech, and Noah.”

I think that clears the misunderstanding up. There is no list of descendants from Cain after the flood. [2]

You can find the Serpent Seedline doctrine on the net, but always do your own investigation; search the Scriptures, comparing scripture with scripture. Pray and ask Yahweh to reveal the truth to you about everything.

The “children of the Devil” —

1) commit sin; their works are evil

2) are liars who don’t abide in the truth; there’s no righteousness or light in them

The Sons of God —

1Jn 3:1  Behold, what manner of love the Father hath bestowed upon us, that we should be called the sons of God: therefore the world knoweth us not, because it knew him not.
1Jn 3:2  Beloved, now are we the sons of God, and it doth not yet appear what we shall be: but we know that, when he shall appear, we shall be like him; for we shall see him as he is.

1Jn 5:1  Whosoever believeth that Jesus is the Christ is born of God:

Gal 3:26  For ye are all the children of God by faith in Christ Jesus.

Dear reader, are you seeing a pattern throughout these verses that the “sons of God” are those who have “received Christ as their Lord and Savior,” who “believe on His name,” “who believe that Jesus is the Christ,” and are “led by the Spirit?”

Characteristics of the sons of God —

1) they believe that Jesus is the Son of God, Savior of mankind

3) they’re led by the Spirit of God

4) they “overcome” the world, the flesh, and the devil

Rev 21:7  He that overcometh shall inherit all things; and I will be his God, and he shall be my son.

Rev 2:11  He that hath an ear, let him hear what the Spirit saith unto the churches; He that overcometh shall not be hurt of the second death.

It would appear that the Serpent Seedline teaching that Cain was the physical seed of Satan and Eve (Adam’s wife) is speculative or inconclusive if going by the books of the Bible that were accepted as inspired. The books not accepted as inspired, referred to as extra-biblical, contain some details on these topics not included in most of our bibles today, such as the Gospel of Phillip, book of Enoch, and the Zohar (the main source for the teachings of the Kabbalah) [1] which are Gnostic works not accepted by most Christians.