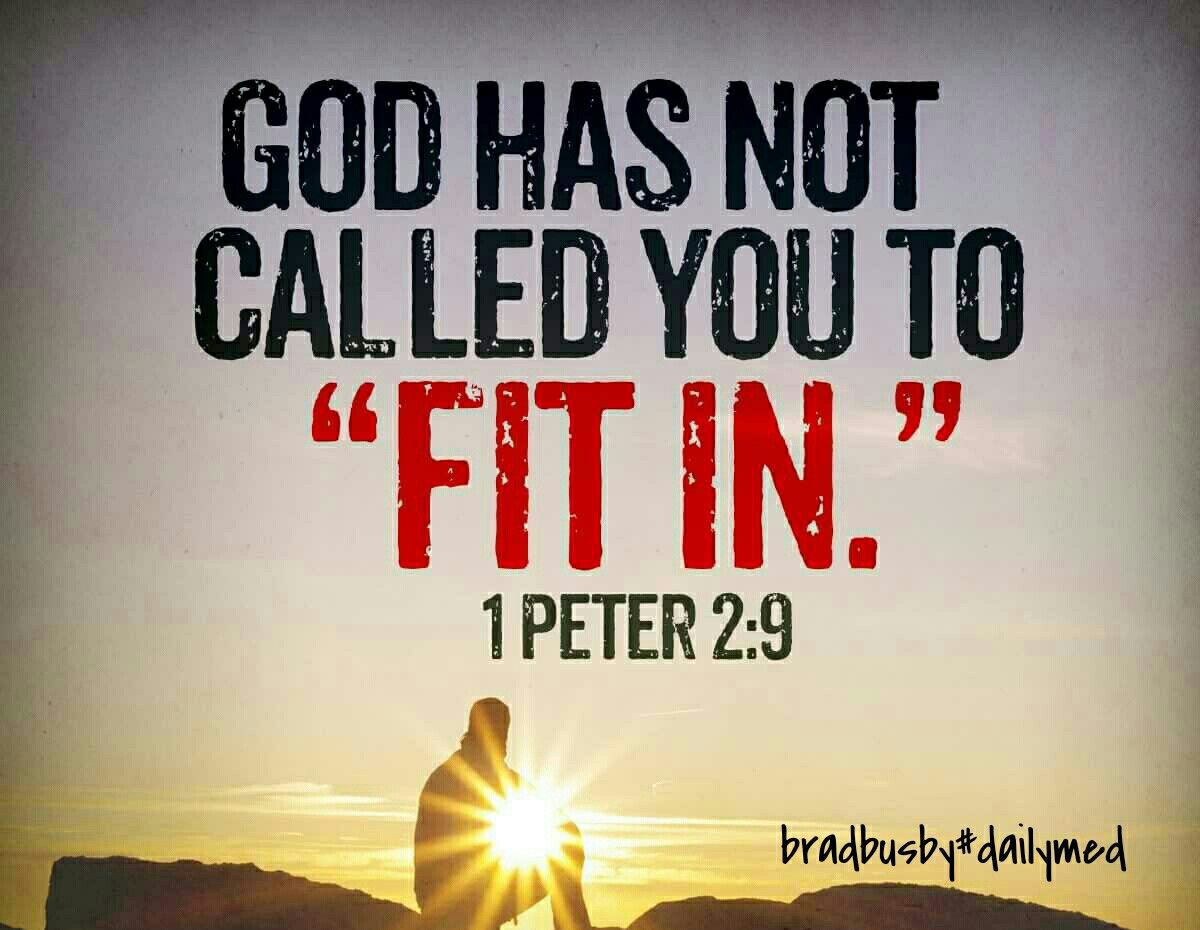 1Pe 2:9  But ye are a chosen generation, a royal priesthood, an holy nation, a peculiar people; that ye should shew forth the praises of him who hath called you out of darkness into his marvellous light:

Tit 2:14  Who gave himself for us, that he might redeem us from all iniquity, and purify unto himself a peculiar people, zealous of good works.

2Pe 1:3  According as his divine power hath given unto us all things that pertain unto life and godliness, through the knowledge of him that hath called us to glory and virtue:

Rev 1:6  And hath made us kings and priests unto God and his Father;

Kings and priests of God are to be “holy.” To be “holy” is to be “separate” from the world because you can’t be of the world and be holy at the same time!

Joh 15:18  If the world hate you, ye know that it hated me before it hated you.
Joh 15:19  If ye were of the world, the world would love his own: but because ye are not of the world, but I have chosen you out of the world, therefore the world hateth you.
Joh 15:20  Remember the word that I said unto you, The servant is not greater than his lord. If they have persecuted me, they will also persecute you; if they have kept my saying, they will keep yours also.
Joh 15:21  But all these things will they do unto you for my name’s sake, because they know not him that sent me.

Notice, it’s those who actually “DO the will of God” that abide forever, not those who only have good intentions.

1Pe 4:3  For the time past of our life may suffice us to have wrought the will of the Gentiles, when we walked in lasciviousness, lusts, excess of wine, revellings, banquetings, and abominable idolatries:
1Pe 4:4  Wherein they think it strange that ye run not with them to the same excess of riot, speaking evil of you:
1Pe 4:5  Who shall give account to him that is ready to judge the quick and the dead.

Conclusion: The people of Yahweh aren’t supposed to look just like the rest of the world which is preoccupied with many “lusts.” They’re supposed to look, speak, and act UNLIKE the world. They’re supposed to be a “peculiar,” HOLY people, “zealous of good works,” “priests and kings unto God.” Think of it, we’re called to be priests and kings of God! What an honor, and yet, how many take this seriously? How many are willing to give up some or any of the world to obtain the “high calling” of God?

Pressing Towards the Mark

Php 3:14  I press toward the mark for the prize of the high calling of God in Christ Jesus.
Php 3:15  Let us therefore, as many as be perfect, be thus minded: and if in any thing ye be otherwise minded, God shall reveal even this unto you.

Was it easy for Paul or any of the other disciples to follow Christ? Didn’t they all have to give up something to do so? Peter left his fishing career and eventually gave up his life to follow Christ. Paul suffered “many things” for the gospel’s sake. Why is it that the western, modern church believes it doesn’t have to? Corrie Ten Boom, a Dutch woman who ended up in a concentration camp for hiding Jews in Hitler’s Germany, asks that question in her books which I highly recommend.

The Cost of Discipleship

Luk 14:25  And there went great multitudes with him: and he turned, and said unto them,
Luk 14:26  If any man come to me, and hate not his father, and mother, and wife, and children, and brethren, and sisters, yea, and his own life also, he cannot be my disciple.
Luk 14:27  And whosoever doth not bear his cross, and come after me, cannot be my disciple.
Luk 14:28  For which of you, intending to build a tower, sitteth not down first, and counteth the cost, whether he have sufficient to finish it?
Luk 14:29  Lest haply, after he hath laid the foundation, and is not able to finish it, all that behold it begin to mock him,
Luk 14:30  Saying, This man began to build, and was not able to finish.

Luk 14:31  Or what king, going to make war against another king, sitteth not down first, and consulteth whether he be able with ten thousand to meet him that cometh against him with twenty thousand?

Luk 14:32  Or else, while the other is yet a great way off, he sendeth an ambassage, and desireth conditions of peace.

Luk 14:33  So likewise, whosoever he be of you that forsaketh not all that he hath, he cannot be my disciple.

Jesus is saying that being His disciple will cost you EVERYTHING. Yes, people will mock you for being “peculiar” and not joining in with the rest of the world in its excesses. Yes, even members of your own family may turn against you and others may persecute you. That’s the “cost” of truly following Jesus, not just giving Him “lip service.”

Are you “peculiar” or do you speak, think, look, and act just like the world? I don’t mind being “peculiar” or different from the world for Jesus and the gospel’s sake. We can be in the world while not being “of” it.