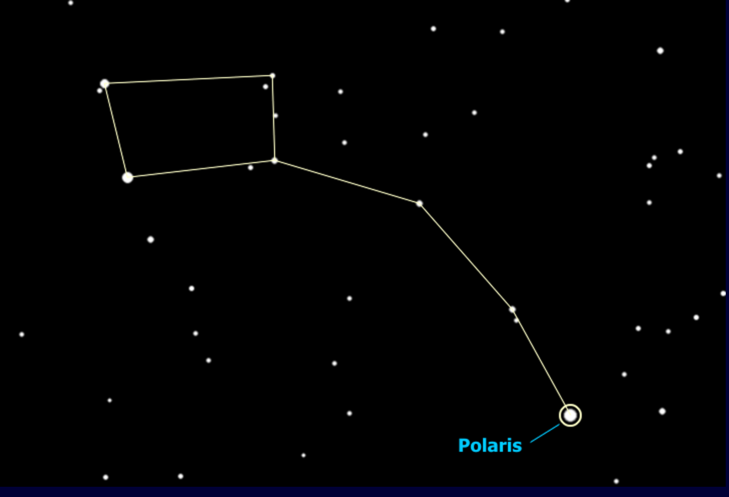 In this dream I was looking out my window at the night sky, and saw what looked like the Big Dipper, or a large ladle turned upside-down. Next, I saw this ladle flip upright and move slightly upwards. After that, the top part of it, the ladle, changed into a large rectangle. Each of its sides was covered with shiny rectangles which might have been windows, but I was not able to see through them. They could also just have been made of a solid, shiny material. They appeared to be dark and almost black up against the dark night sky. The bottom part, the handle got thicker resembling a cylinder. It stayed stationary as the top rectangular piece began to slowly spin around counter-clockwise, and as it did, its shiny surface reflected light. I was amazed, and said to myself, “Look at that! What is this thing, what’s it doing?” As I kept watching, the entire apparatus began to move slowly in a straight path across the night sky towards my left. It did that for a minute or two when I became frightened and turned away from watching it. When I turned back again, I couldn’t find it, it seemed to have disappeared. I wondered if the object was some sort of satellite taking pictures of people on earth, and wondered if it took mine, and could see me watching it.

←This satellite comes close, only the object I saw was more rectangular, and its surface was darker and shinier, ‘glass-like’ in appearance. The one I saw also had a cylindrical pole or handle attached to it, pointing downward.

←This one’s panels more closely resemble the shape and the shine of the object I saw in my dream, except mine was nearly black, and I think it had four, not three sides.

The one on the right has a ‘cylindrical’ piece pointing downward.

None of these satellite images match exactly what I saw, but they give you an idea. What does it all mean? Well, for one, Surveillance has increased exponentially since 911. Because of various laws and treaties which have been passed over the past few decades, our way of life and values we hold dear (like privacy for instance), are being “turned upside down.” Truth is being turned upside-down. Wrong is now right, black is now white. What used to make sense doesn’t anymore. Powers beyond our control are at work in the shadows, watching every move we make. Here’s a Scripture verifying this ‘turning of things upside down’ – Isa 29:16 “Surely your turning of things upside down shall be esteemed as the potter’s clay….”

Albert Barnes’ Commentary on Isa 29:16, Surely your turning of things upside down – Your perversion of all things. They had no just views of truth. They deemed mere formality to be all that was required *(as many churches do today). They attempted to conceal their plans even from Yahweh; and everything in the opinions and practice of the nation had become perverted and erroneous. *Comment in parenthesis added by me.

An important fact to remember in all prophecy is that regardless of the vehicles used, be they angels, rulers of worldly governments, or individuals; God is the causative agent.  This means that besides His angels, God uses the physical, natural world and powers to carry out His purposes.  He might allow natural forces to turn our way of life upside down because we have abandoned Him. It may also mean that God is ‘pouring something out’, or allowing something to be poured out upon the nations of the world. In Bible prophecy, God is going to “pour out” extreme DARKNESS upon the entire planet just prior to Jesus’ return [Exodus 10:21, Revelation 16:10], so the ‘black object‘ may represent the blackness and intensity of that darkness.

As I was pondering current events and comparing them to bible prophecy it struck me that the black object might represent the KAABA STONE, the BLACK CUBE which Muslims worship. The direction of the flying object in the dream, was going across the sky from EAST to WEST; meaning Islam is advancing to the Western hemisphere from the East. Lastly, that extremist, militant Islam is “turning the world upside down,” attempting to change the laws, customs, and faiths of the whole world, forcing Islam upon all by whatever means possible.

BEWARE! Allah is NOT the same God as Yahweh the true God of the Bible. To worship an object like the Kaaba stone (Islam’s ‘black cube’) is IDOLATRY or IDOL worship, which Yahweh hates. In His timing, Yahweh will destroy all idols and judge all idol worshipers.

There’s another possible interpretation and fulfillment of the flying black object which seems to fit even better in light of the current global Covid-19 pandemic. The Corona virus began in the EAST and spread to the WEST, as did the flying black object in the dream. It certainly has “turned our lives upside down!” I’ve heard it said dozens of times by news reporters and others in reference to how Coronavirus has affected our lives. If you’re paying close attention you’ll hear it being said all of the time now.

The black object flying across the sky in my dream was a DARK portent which the Corona virus has proved to be in that it has brought DEATH to thousands all over the world. Black is often a symbol of DEATH. One more piece that fits the dream well I think, is that God may indeed be “pouring out,” or allowing the virus to be poured out on the world which has for the most part, turned its back on Him! In my dream the object was first a “ladle” resembling the Big Dipper star constellation before it changed into something else. What does a “ladle” do? It pours stuff out.