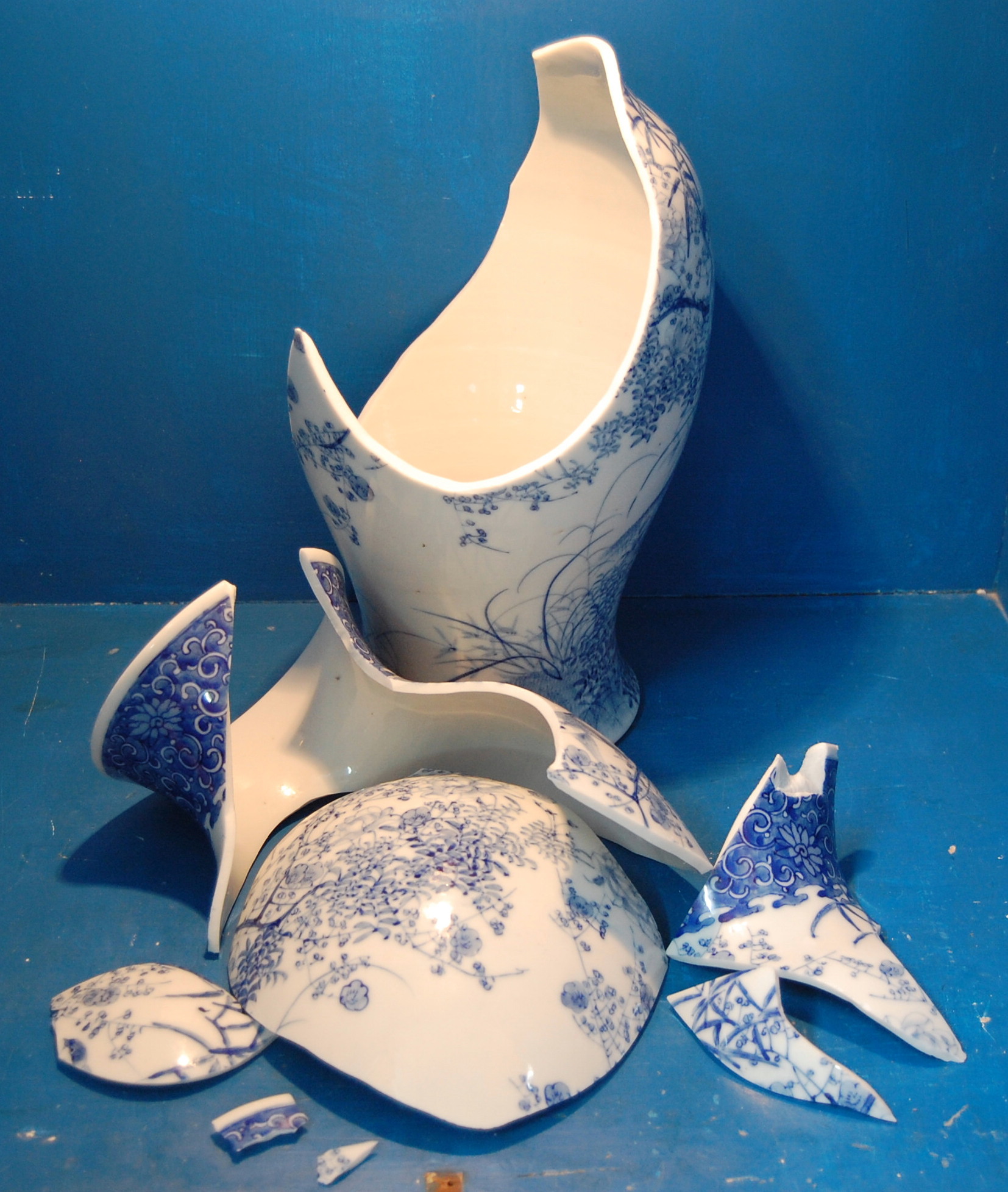 A SHATTERER HAS COME UPON YOU!

In this dream I saw and heard a vase shattering, the sound of which was so loud it woke me. Immediately I got up and ran to my living room to see if my favorite ceramic vase was lying on the floor in pieces. It wasn’t. That’s when I realized the dream was from God, so I waited on Him for awhile to see if He would tell me the meaning, but He didn’t, so I went back to sleep.

Upon awakening the next morning I heard this Scripture: “Now the weight of gold that came to Solomon in one year was six-hundred, sixty, and six talents.” – 2 Chronicles 9:16.

This numerical sequence, often rendered as just 666, in the oldest Greek manuscripts is rendered as three Greek letters, chi, xi, and stigma, which have the numerical values of 600, 60, and 6, in that order. Most would agree this number is a reference to “apostasy” and/or to an“antichrist” spirit that influences men to rebel against Yehovah and His truth. In the “end of days,” also called the End Times or Last Days, this spirit of antichrist and apostasy will be most prevalent and manifest in great violence and upheaval worldwide, according to Biblical prophecy. Jesus, Paul and other disciples wrote and taught about a “spirit of antichrist” and “a spirit of iniquity,” which were already at work in the fledgling Church [2 Peter 2:1-22; Gal 1:7, 2 Cor 11:13&14]. Apostates are those who ‘turn away’ from worshiping Yehovah the true God, to worship and serve pagan (foreign) gods [2 Tim 4:4, Titus 1:14]. King Solomon is a clear cut example of an apostate, one who knew Yehovah but ‘fell away’ [Heb 6:4-6;1 Tim 4:1] from Him to worship “foreign gods” [1 Kings 11:4-11]. Here are the only other references to the number 666 in the Bible – Ezr 2:13 The children of Adonikam, six hundred sixty and six. 1Ki 10:14 Now the weight of gold that came to Solomon in one year was six hundred threescore and six talents of gold. Rev 13:18 Here is wisdom. He that hath understanding, let him count the number of the beast; for it is the number of a man: and his number is Six hundred and sixty and six.

UPDATE: Adonikam – means “my lord arose” or, “lord of rising”; taken from H113 – sovereign, that is, controller (human or divine): – lord, master, owner. *This is the key I believe to interpreting the number 666, and its application to End Time prophecies of the coming Antichrist Beast. The Adonikam were the children of the Fallen Angels who abandoned their  estate in Heaven and came to Earth to mate with human females producing a race of GIANTS called NEPHILIM.  You see, the “lord of rising” is the Dark Lord Satan, who will rise up through a human-hybrid creature or Nephilim, near the very end of the last days. He will try to rule the world until he is destroyed at the coming of the Almighty God [1]. What all this means is that the “beast” and “his number 666” is connected to the Nephilim or fallen angels who will MIX or “MINGLE THEMSELVES WITH MEN” [2] near the end of this Age to CORRUPT once again the Human Race by CHANGING MAN’S DOUBLE-STRANDED DNA into a TRIPLE-STRANDED DNA symbolized by three sixes [3]. Thus, 666 stands for a three-stranded DNA – the DNA of Satan mixed with human DNA! This is entirely possible as scientists have been steadily experimenting with DNA for decades, and are close to bringing this dark scheme of the Luciferian Illuminati to pass in our generation which is to corrupt the IMAGE OF GOD [4] in humankind rendering it non-redeemable. The Dark Lord (Satan) also hopes to evade his eternal damnation through this plan, but he will fail, for Yahweh is Lord of all. ***UPDATE 3-27-18 The article from which the following excerpt was taken, seems to confirm that Adonikam, which means “Lord of Rising,” is a TYPE of the coming Abyss Beast. Read all of the article for a full understanding –

It can easily be suggested that Adonikam is a TYPE example of the coming Abyss Beast. The future Abyss Beast is the demonic 8th King of Rev. 17:11 and Rev. 17:8, who once ruled the former Babylonian Empire (Jer. 51:25) and when his Kingdom fell by the SWORD of the Lord (Jer. 50:35) he was thrown into captivity in the Abyss where he remains to this day, Rev. 9:11 – the Destroyer King Abaddon/Apollyon (his occupational/vocational name) – similar to the spirit of Kundalini/the Serpent Power which is said by deceived Yoga worshippers – to lie coiled exactly 31/2 turns around the sacrum bone at the base of the human spine. http://shalach.org/Antichrist/Number%20666%20and%20Name%20of%20the%20Beast.htm

I believe the End Time “strong delusion” [5] is when men are fooled into believing that the Antichrist IS Christ, not realizing that he’s a NEPHILIM, a hybrid mixture of human and angelic flesh.  Also, part of the strong delusion will be that ALIENS (demons really) seeded Mankind and will return in spaceships to save the human race – a current theme in most media outlets [6]. The AntiChrist will be a NEPHILIM who will cause unregenerate men to worship a false god. All who take the name, number or mark of the Beast, will be eternally damned with him. There can be no repentance after giving your allegiance to the Beast.  As for King Solomon, also associated with the number 666, maybe the AntiChrist will be a resurrected Solomon via cloning, or be like him in some way (wise, wealthy?) – Today, researchers suppose that the Number of the Beast may be somehow connected with the genetic code indicated in figures. The number 666 may be the sequence of DNA genetic signals or DNA fragments necessary for successful cloning [7]. Modern science can extract DNA from dead animals and CLONE them from it – But if this were ever to happen to a human being, few people would consider that the deceased person had been raised from the dead as a result of having a living clone [8]. This is conjecture, but it might be possible via cloning, to make it look like Solomon (or someone else) came back to life, or ‘arose from the dead,’ thus imitating the resurrection of Jesus Christ. Satan has always wanted to be like the Most High [9], but will fall short in every way, at every attempt.

After I looked up the verse about Solomon, I searched the Bible to see if I could find either the word ‘break’ or ‘shatter’ and found it in an old testament prophetic book – Nahum 2:2, “A shatterer has come upon you; man the guard posts, watch the road, steady your loins, and brace all your strength.”

Various definitions of ‘shatterer‘ H6327 pûts – he who dashes to pieces, he who scatters, an attacker, a destroyer, one who shatters. ‘man the guard posts’ – be at my post in order to protect, defend, and care for; ‘watch the road’ – watch for the enemy attack to begin! ‘steady your loins’ – be ready for action, be in a constant state of readiness; ‘brace all your strength’ – be prepared to withstand danger and/or impact. Hold steady, invigorate, stimulate, and fortify. [Webster’s Dictionary]

INTERPRETATION of the Dream: A shatterer was coming upon me, or possibly the United States of America, or both, and I should be watchful and get ready for it.

PARTIAL FULFILLMENT of the dream: I believe it was the terrorist attack on the Twin Towers in New York City and the Pentagon three years later on September 11, 2001. Afterwards, I realized the dream was a warning of that tragic event. The thousands of pieces of glass falling to the ground when planes ripped through the buildings, SHATTERING windows, was similar to Kristallnacht, The Night of Broken Glass, when German gestapos “shattered” the windows of Jewish businesses in 1938. What I think the 911 attackers wanted to accomplish was the shattering of America’s sense of security and dominance in the world. Their attack was an announcement that they’re able, funded, organized, and highly motivated to carry out their objectives. *Update: The destruction of the Twin Towers might symbolize the Elite’s plan to destroy Man’s double-stranded DNA by adding ‘another’ strand to it, changing it into something other than totally human and destroying God’s image in Mankind [10]. This goes against God’s decree that all flesh is to reproduce after “its own kind” [11].

[1] 2Th 2:8  And then shall that Wicked be revealed, whom the Lord shall consume with the spirit of his mouth, and shall destroy with the brightness of his coming:

[2] Dan 2:43  And whereas thou sawest iron mixed with miry clay, they shall mingle themselves with the seed of men: but they shall not cleave one to another, even as iron is not mixed with clay.

[4] Gen 1:27  So God created man in his own image, in the image of God created he him; male and female created he them.  http://www.douglashamp.com/how-the-mark-of-the-beast-will-rewrite-the-human-genome-part-three-corrupting-the-image/

[5] 2Th 2:9  Even him, whose coming is after the working of Satan with all power and signs and lying wonders,
2Th 2:10  And with all deceivableness of unrighteousness in them that perish; because they received not the love of the truth, that they might be saved.
2Th 2:11  And for this cause God shall send them strong delusion, that they should believe a lie:
2Th 2:12  That they all might be damned who believed not the truth, but had pleasure in unrighteousness.

[9] Isa 14:13  For thou hast said in thine heart, I will ascend into heaven, I will exalt my throne above the stars of God: I will sit also upon the mount of the congregation, in the sides of the north: Isa 14:14  I will ascend above the heights of the clouds; I will be like the most High.