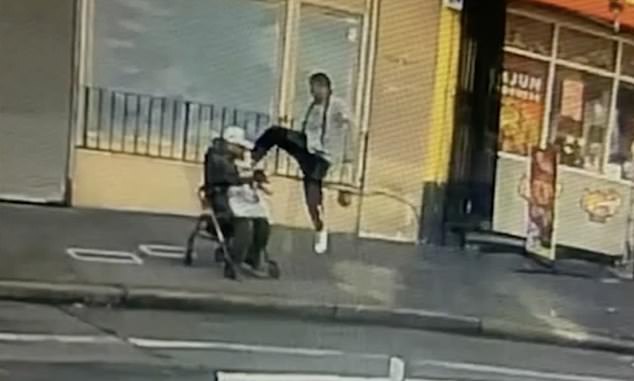 [Photo of a disabled man being kicked out of his walker seat by a complete stranger – copied from Dailymail.co.uk]

Some are so focused on endtime signs such as war with Israel, a rebuilt Jewish temple, famines and pestilences, that they may be overlooking more common signs like those mentioned in 2 Timothy 3:1-5 and Romans 1:22-32,

2Ti 3:1  This know also, that in the last days perilous times shall come.
2Ti 3:2  For men shall be lovers of their own selves, covetous, boasters, proud, blasphemers, disobedient to parents, unthankful, unholy,
2Ti 3:3  Without natural affection, trucebreakers, false accusers, incontinent, fierce, despisers of those that are good,
2Ti 3:4  Traitors, heady, highminded, lovers of pleasures more than lovers of God;
2Ti 3:5  Having a form of godliness, but denying the power thereof: from such turn away.

The endtime sign which I’ll be focusing on in this article, “without natural affection,” has become so commonplace that one could easily overlook it.  Young unwed mothers giving birth in bathrooms and afterwards tossing their newborns into trash bins alive, or murdering them first, are prime examples of human beings without natural affection, wouldn’t you say? Miraculously, some newborns survive such barbarism, being found by some passerby who rescues the child from death’s jaws. How can a mother commit such a heartless act? It’s inhuman and unnatural.

Many today have lost their ability to feel empathy for others. More than at any time in history, adult children are abandoning their aging parents who need them most at the final stages of their lives. You can find countless testimonies online and in books of parents who did right by their children who were nonetheless later abandoned by their adult children for no apparent reason whatsoever. How can children be so cold and uncaring towards the parents who nurtured and raised them? Why is this happening and what does it mean? Then, there are increasing reports of random acts of violence against the most vulnerable – the elderly, women and children, and even the disabled! Such cold heartedness and total disregard for human life is a shocking sign of the depth of depravity to which mankind without God can sink to. What we’re seeing is the fulfillment of the scripture which prophesied that in the last days people would be without natural affection.

Another passage having the phrase, “without natural affection” is in the book of Romans —

Rom 1:18  For the wrath of God is revealed from heaven against all ungodliness and unrighteousness of men, who hold the truth in unrighteousness; [skipped vss. 19-20]
Rom 1:21  Because that, when they knew God, they glorified him not as God, neither were thankful; but became vain in their imaginations, and their foolish heart was darkened. [skipped vss. 22-27]
Rom 1:28  And even as they did not like to retain God in their knowledge, God gave them over to a reprobate mind, to do those things which are not convenient;
Rom 1:29  Being filled with all unrighteousness, fornication, wickedness, covetousness, maliciousness; full of envy, murder, debate, deceit, malignity; whisperers,
Rom 1:30  Backbiters, haters of God, despiteful, proud, boasters, inventors of evil things, disobedient to parents,
Rom 1:31  Without understanding, covenantbreakers, without natural affection, implacable, unmerciful:
Rom 1:32  Who knowing the judgment of God, that they which commit such things are worthy of death, not only do the same, but have pleasure in them that do them.

From these two passages alone it’s clear that we’re living in the last days in which Jesus Christ will return to this earth to judge the wicked and unbelieving multitudes. After the tribulation, God will order His angels to “gather the tares into bundles to be burned and the wheat into his barn.” Tares are the unbelievers who are against Christ and the wheat are the righteous who believe in Christ. Ref’s. Mt 13:24-30

Friend, are you ready to meet the One who made heaven and earth? Are you prepared to give Him an answer for every deed you carried out in your lifetime? If you’re not, may I suggest that you get ready before time runs out and with it the opportunity to get right with God, because that day is coming and nothing can stop it. If you haven’t given your heart and your allegiance to Yahweh, maker of heaven and earth and all that is, please consider doing so right away, don’t wait until you feel like it because you may never feel like it! Faith isn’t based on feelings and neither is salvation, it comes by hearing the word of God – Rom 10:17 “So then faith cometh by hearing, and hearing by the word of God.” When you believe in your heart that Jesus died for your sins on the Cross and then confess with your mouth that He is Lord you will be saved, that’s God’s promise to every human being who receives Him – Rom 10:9  “That if thou shalt confess with thy mouth the Lord Jesus, and shalt believe in thine heart that God hath raised him from the dead, thou shalt be saved.” Rom 10:13 “For whosoever shall call upon the name of the Lord shall be saved.”

People often mistakenly think that God is a big sugar daddy in the sky who won’t punish anyone for doing wrong. They forget that the book of Genesis tells how God destroyed the whole world with a Flood because men were committing wicked acts continuously (like they are today) – Gen 6:17 “And, behold, I, even I, do bring a flood of waters upon the earth, to destroy all flesh, wherein is the breath of life, from under heaven; and every thing that is in the earth shall die.” While God promised to never again destroy the earth with a flood, He did say He would destroy it with “fire” – 2Pe 3:10 “But the day of the Lord will come as a thief in the night; in the which the heavens shall pass away with a great noise, and the elements shall melt with fervent heat, the earth also and the works that are therein shall be burned up.”

If you don’t have a bible I urge you to get one, preferably a King James version, and start reading it like there’s no tomorrow, because frankly, there just may not be a tomorrow – for you. If you’ve read the bible before and just haven’t taken the step to ask Jesus to save your soul, there’s no time like the present, why wait? Wait for what? The End will happen so quickly, there won’t be time for anyone to get saved once God’s judgment begins. So don’t put this off, turn to Jesus now, believe that He is God, believe that He died for your sins, turn away from sin, and receive Him as your Savior and Lord. It’s as easy as saying a simple prayer in your own words admitting that you’re a sinner in need of His salvation. I’m sure you won’t regret it, for He is Faithful and True!

Daughter of the King of Kings