To the rioters who are protesting Trump’s election – loving people don’t destroy property, attack and injure others, deface buildings with racial slurs, trample and burn the American flag, or spew filthy, derogatory words from their mouths! 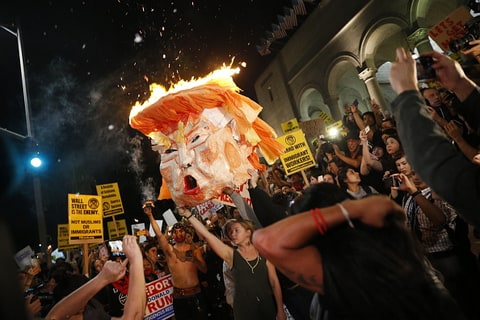 Burning effigies of Donald Trump is a very HATEFUL act, can you see that? You and the Democrats spout ‘Peace, Love, and Tolerance’ so long as things go your way, but the minute they don’t, you go out and behave the very opposite! Do you know the definition of hypocrite?

Trump supporters involved in this outrageous behavior, STOP and THINK! If this turns into a race war or Marshall law, it will be YOU and President Elect Trump who will blamed, even if the majority of those carrying out violent and hateful acts are Hillary supporters! Besides, I find it hard to believe that Trump supporters are painting Swastikas and ‘Heil Trump’ on church buildings. Is it possible that anti-American provocateurs are paying demonstrators to make it look like it’s Trump supporters doing these things? It would be the perfect ploy; one that George Soros [1] the billionaire banker and his friends the Clintons could devise to further their Socialist cause of destroying America.

Speaking of provocateurs, our news media daily serves a rich menu of Liberal-Socialist-Marxist opinion [2] and continually INCITES hatred and division among people, instead of reporting the news in a non-biased, objective fashion. Another sector which bears responsibility for shaping minds, is our educational system, which is sadly saturated with Socialistic educators and funders who choose the curriculum. Then there’s the Church, who’s supposed to represent Christ and lead the world to Him, incorporating Progressive ideas into its teachings and making itself a corporation of the State (501c3), instead of being separate from the world like the Scriptures command [3]. Is it any wonder so much of our youth has turned from the faith of their fathers to embrace Socialistic, progressive, ideologies? [4] PROGRESSIVE = HATER of traditional, biblical mores and values! Ever since Atheist Madalyn Murray O’Hair [5] and others like her, got God and His Ten Commandments kicked OUT of our schools, courts, and all public places – America’s morality has steadily declined! “Thou shalt not kill…thou shalt not covet thy neighbor’s wife, house, or anything that is your neighbor’s….thou shalt not steal….” displayed in public places reminds people there’s a right and a wrong way to treat one’s neighbor! Men and women devoid of God and His spirit, are beasts who brutalize and terrorize their neighbor, as we’ve recently witnessed all across our nation. Beating and injuring people is something HATERS do! Haters can’t blame President Elect Donald Trump or Racism for their hateful speech and acts! All must take personal responsibility for their own words and actions.

People, open your eyes to what’s really going on. Where might your rioting, violence, and vandalism lead – a race war? Marshall law? Civil war? Although someone like George Soros may want to dismantle our Constitution and national sovereignty, and reduce America’s greatness to a third-world status, how would America’s collapse serve YOUR best interests? Is that really what you want for your families? If you’re so intent on living in a third-world country, go find one to live in, but leave America to those who RESPECT and APPRECIATE IT.

The problem with most of the demonstrators, is that they’ve had it TOO GOOD in America. They’ve gotten everything they’ve wanted (and demanded) for the past eight years at least. Perhaps a long stay in some third world poverty-stricken nation, or jail time, would jolt them back to reality? Most of them appear to be college students. Colleges today are nothing more than RECRUITMENT centers for Socialist-Marxist ideology and agendas which are faithfully taught from textbooks written by social engineers [6]. Being a college graduate myself, I saw how much of it students are exposed to.

RIOTERS, you’re being manipulated by liberal, Socialistic-Marxist-Fascist proponents in the media, schools, and government. STOP being their PUPPETS! They’re only USING YOU to bring about the ‘changes’ they want to see happen in America, which is to turn America into a full Socialistic-Marxist-Fascist nation completely under THEIR CONTROL! If that happens, personal freedoms and choices would be very restricted! Health care, food, water, clothing, housing, transportation, EVERYTHING – would be controlled and rationed by the government. We’ve been heading in that direction for some time, no thanks to rich and powerful Socialists who have infiltrated America’s educational, agricultural, medical, religious, and political institutions – to subvert our laws, our values, and our freedoms!

Those COMPLAINING of not having enough in America must not realize that there’s no better place to be! Where else does one enjoy as many rights, including the right to peacefully protest? Note that the law stipulates PEACEFULLY, peacefully does not include violence, rioting, battering people, and vandalizing property! If you’re so miserable in America, why stay?

If you would put your faith in GOD instead of looking to government for what you need, you wouldn’t be rioting in the streets and assaulting people. Your REAL PROBLEM is that you have NO FAITH IN GOD, or don’t have GOD in your lives at all. I’m convinced that if everyone knew GOD, there would be real and lasting, peace, love, and harmony between all nations and races. For it is written, “He that loveth not knoweth not God; for God is love [7].

“Seek Him while he still may be found” [8]. Seek Him NOW. Pray this prayer in Faith, “Heavenly Father, I realize that I’m a sinner and can’t save myself, and that only the Blood of Jesus can wash away my sin. I invite you Lord God to save me from sin and your wrath that’s coming upon all unregenerate and unrepentant sinners. Jesus, please be my Savior and Lord this very moment – I believe that you paid the price for my sins that I might escape the soul-destroying fires of Hell and live forever in your presence. Thank you Lord, Amen.”

If you prayed that prayer or would like to know more about being Born Again and receiving Jesus as your lord and savior, please don’t hesitate to send an email to calm_meadow@yahoo.com I’ll try to answer any questions or concerns you might have, and would be happy to hear if any of the content of this blog has encouraged or helped you in any way.

“THE TIME IS SHORT” said the prophetic voice of God, spoken recently through a church member. It means that the time for evangelizing the world and for sinners to get save is short, because Jesus Christ is returning soon! So, there’s no time to waste on self-pity, excuses, rioting, drugs and drunkenness, partying, pleasure-seeking, and so on. Sinner and saint alike – SEEK GOD WHILE HE MAY STILL BE FOUND, ‘before the door is shut,’ ‘before night comes when no man can work’ [9, 10].